The zombie apocalypse trope is well established in literature, movies, computer and board games. And in megagames too, with the first series of Urban Nightmare megagames played in 2012.

As a megagame, the Urban Nightmare games explore the higher level decision making during a major, potentially existential, crisis. In the movies and other games the zombie trope generally focusses on the individual or on small groups of survivors, but rarely explores how the world gets to that state. It all just happened and got out of control.

In a megagame we can really look at how things get that far out of control. Or not. In the emerging gameplay of a megagame the outcome is entirely open to the consequences of player decisions and their interactions.

In the previous version of the game, the focus was on just one city, Romero City, a place beset with many mundane problems of its own even without the outbreak of a terrifying pandemic. In UN: State of Chaos, we have extended the perspective to explore what is happening across the whole state. Five cities (of which Romero City is the largest) are all struggling with their own troubles and turning to the State Governor and the National Guard for help. Will this be enough? or will the state Governer have to sacrifice valuable political capital and go, cap in hand, to the Federal authorities and the President for Federal help. 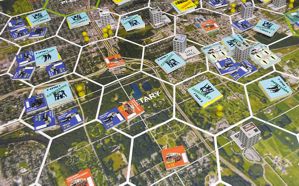 So, of course, there is more than one state in the United States of America. What if the crisis is cropping up in more than one state? Together with partners all over the world we are organising multiple megagames, each megagame representing a different state in a fictionalised America containing different cities.

Those games both stand alone as individual megagames yet are in touch with each other, and are played in exactly the same time frame on the same day. So, for example, Governors of neighbouring states will be able to confer with their counterparts - pass on what they have learned, or warn of cross-border threats.

And there will be an overall Federal team in touch with all the games and allocating important resources, in real time, to where they are most needed.

This is the first time we have attempted anything like this, so it is an exciting project for Megagame Makers, and megagames in general. And you can be a part of it! If you want to take a look at the central site for this game follow this link to the British UNSOC site.

In the Netherlands, this game will be played on the 1st of July 2017 in Wijkcentrum De Ark van Oost in Nijmegen. Since it is necessary to play in the same time frame, we will play this game from 10.00 till 17.00 BST (British Standard Time) or 11.00 till 18.00 CET, so one hour later than we usually play our megagames.

This is roughly how the teams look in a single game of Urban Nightmare : State of Chaos:


If you want to form a team with your friends, think of a good team name and register with this team name. What could possibly go wrong? 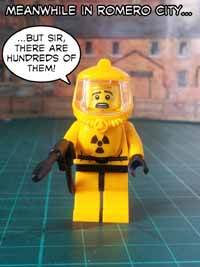 Costs to participate in the game are €20,– for players and €10,– for umpires. You can enlist individually or as a group. For more information, contact us through the web form at Contact.