by Jim Wallman
Multifunctional Center Maldensteijn, Malden. This game is planned for the 2nd of July 2022.

This game is about the political and military activity during the Sengoku Era of Japanese History (roughly speaking the second half of the 16th century). This is an age of land-grabbing lords (daimyo), incessant warfare and power plays. We start the game in year 19 of the Tenbun Era. The current Shogun, Ashikaga Yoshiteru, is only 16 years old and currently in exile.

Much of the game is about the power politics of the time, the forming and dissolution of alliances and consequent military activity. However, it is important that under all circumstances, correct behaviour and etiquette is observed. An impolite man is an unlucky man.

Another part of the game has to do with economics as each controlled province provides rice income and possibly cash income. With this income, troops can be levied, and castles/fortresses maintained or built.

Player teams come in 3 kinds. First, seven or more player teams represent the most important clans of the time. Second, two of the teams represent large, influential and military strong temples of warrior monks (Sohei). The last team is formed by the Bakufu (The Shogun's military and civil administration, which serves the Empire, not the Emperor). 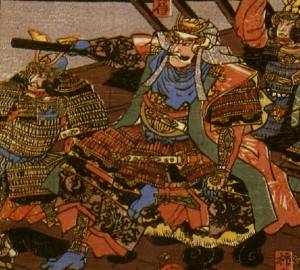 The clans that will be played are Hojo, Miyoshi, Oda, Takeda, Uesugi, Mori and Imagawa. We can add more clans if we really have a lot of players. Players can take the role of:

The two Sohei teams will be Enryaku-Ji and Hongan-Ji. Players take the role of:

The game will be played on the 2nd of July, 2022 in Multifunctional Center Maldensteijn, Kerkplein 8 (not 8a: that is another building), 6581 AC Malden, The Netherlands. Maldensteijn is located in one of the corners of the central roundabout of Malden (or its 2nd roundabout, counting from both the north and south). If you are in front of Maldensteijn, you can find its main entrance at its right side.

If you come by car, try to park in the quarter next to the center or on one of the long stay parking places (On the Kerkplein itself, there are parking places marked with blue paint: these are for 3 hour stays only). If you come by public transport, take line 83 either from Nijmegen or from Gennep/Venlo and get off at the bus stop named Groesbeekseweg. You should be in front of Maldensteijn.

Due to the Corona virus outbreak in 2020, we had to postpone this game. Costs to participate in the game are €20,– for players and €10,– for umpires. The game material will be distributed as pdfs by email. On the day itself you will also receive a small personal briefing.