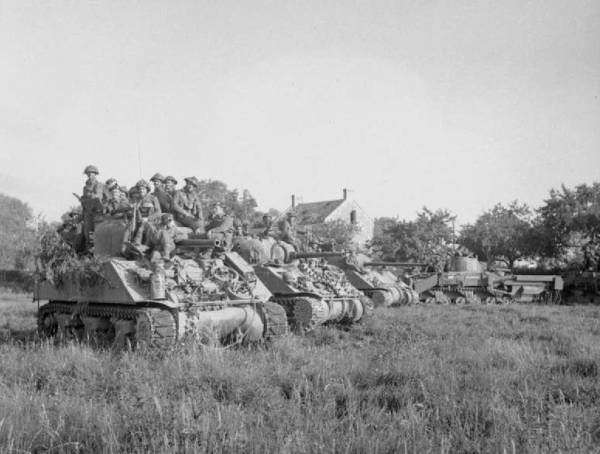 Operation Goodwood was an attack launched on 18th of July 1944, by the British army to the east of the city of Caen with three armoured divisions, supported by a British corps on the eastern flank and a Canadian corps on the western flank.

When Operation Goodwood came to a close on the 20th of July, the armoured divisions had broken through the initial German defences and had advanced 7 miles before coming to a halt in front of the Bourguébus Ridge. Some have called it the largest tank battle that the British Army has ever fought.

This operational megagame pits Divisional and Corps staffs against each other in an intense pitched battle over the French country side. We will be using an updated and modified variant of the free Opcom (Operational map combat) rules.

A typical divisional player team is composed of three players - Commander, Ops Staff officer and Intelligence Staff Officer. Higher headquarters at Corps (or Army) level have larger teams with additional roles. Since this is a closed map megagame, each player team also has a Team Control (umpire).

In addition to the Team Control umpires, we will also have one or two Map Control umpires. The author of the game, Jim Wallman, has indicated that he can come over to Braunfels for this megagame, so he will be the Game umpire.

The game will be played on the 27th of May, 2017 at the XXXI. GHS Hexacon in das Haus des Gastes, Fürst-Ferdinand-Straße. 4a, Braunfels, Germany. The Hexacon is the yearly gathering of the GHS (Gesellschaft für Historische Simulationen), which lasts a full week (this year from the 22nd till 28th of May 2017) during which the GHS members can participate in all kinds of boardgames and wargames (usually but not always) with a historic background.

We will send all game material by email. This is to save costs as well as time. If you do want to get the game material in print we will charge you €5,– for this.

The following picture gives the initial team organisation at the start of the day. This might change during the day, particularly for the German teams, where divisional teams might be reallocated to take charge of reinforcements while the battle unfolds.

Note that on the Allied side, two divisions have been placed directly under the 2nd Army team. This is because it did not seem worth creating two more corps teams handling just a division, and to make the job of the 2nd Army Team more interesting. 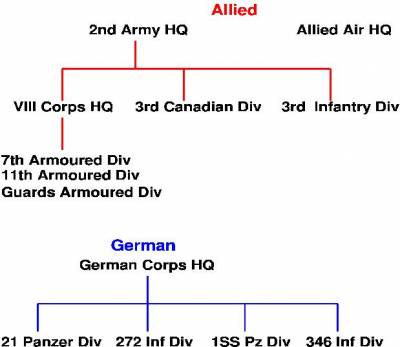 Thus, the teams that will be played are:

At the end of March 2017 we will publish an initial casting for the game. The game can be played with 40 till 65 players.