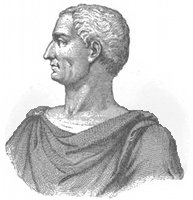 In the spring of 58 BC a Roman proconsul intervenes in the migration of the Gallic tribe of the Helvetii into territories of tribes allied to the Roman republic. With great loss of life the survivors are chased back into the Alps. Although his arrival is ostensibly to boost Rome's allies, it also provides the stage for the military ambitions of the proconsul and he intends to make his presence felt in all of Gaul.

This game covers the struggle between the Gallic nobles as they try to take advantage of the developments set in motion by Caesar's arrival. Should they cooperate with the Romans, or aim to establish themselves as the pre-eminent tribe of an independent Gaul or should they focus on strengthening their position within the tribe?

This game will feature several teams representing the most powerful tribal coalitions in Gaul with players representing the major clans within those tribes. Each will have a following, which will increase with successful raiding of neighbouring tribes and capture of booty. Although one player will lead the tribe, Gallic kingship/leadership is based on military prowess and can never be taken for granted.

Meanwhile, Caesar has plans of his own. Plagued by debts and far from the political limelight of the forum in Rome, he will have to work hard to turn his office into a profitable venture and keep himself in the public eye through extraordinary achievements abroad.

In this megagame, Gallic and Roman players will play their own roles within their teams as well as wage campaigns on the map of Gaul according to their role. The game map will have an open map: you could easily move small parties through Gaul by horse and not be detected but you could not move entire armies on foot without being seen.

You should also not neglect the fact that Caesar used the intertribal enmity within Gaul to his advantage. Most Gallic tribes were also internally divided whether to fight against Caesar or side with him.

Thus, the megagame De Bello Gallico is a combination of a role playing game and a strategic campaign game, based on what we know of the Gallic culture, intratribal and intertribal affairs and the historical events.

Most players in the game will be a member of a Celtic tribe of Gaul. Each of these tribes or collective of tribes will be headed by a King, Queen or Vergobret, who is assisted by the tribe's druid and local chiefs. In the case of a collective of tribes these local chiefs may well be local kings or queens of their own proper tribe. The following tribes will be played:

Each tribe will have its own druid. Because of their important status in Gallic society, you can select this specific role when registering.

Some players will be a member of Caesar's staff, that is one player will play Julius Caesar himself while others play his direct subordinates.

Some roles will also be played by individuals:

Naturally we will also need a lot of umpires. Some will be responsible as team control and others as map umpires. There will also be an overall game umpire and an NPC umpire who effectively plays all roles that are not played by players.

Costs to participate in the game are €20,– for players and €10,– for umpires. You can enlist individually or as a group. For more information, contact us through our contact web form, which can be selected from the left upper tab.